This week we have a guest blog from the City of London highlighting a valuable collaboration that improves the response to individuals experiencing severe mental health episodes while also helping reduce demands on emergency service resources.

The Mental Health Street Triage (MHST) service is a pioneering and award-winning initiative delivered by the City of London Corporation (local authority), City of London Police and the East London NHS Foundation Trust. Formed as part of the local multi-agency suicide prevention programme, it provides on-the-spot assistance to those in crisis.

The City of London is a small geographic area (just over 1 square mile), with a resident population of just over 9,000. However, outside of Covid restrictions it has a working population of over 500,000 and attracts many tens of thousands of visitors and tourists every day. Sadly, it also sees a considerable number of suicides or attempted suicides.

It has been suggested that, for many City workers, the high pressure, competitive nature and long working hours of some City work roles may trigger stress and mental health issues including anxiety, depression and risk-taking behaviours. The concentration of iconic sites, transport hubs and river location may also attract at risk individuals to travel to the area.

To respond to this situation the City of London Police and the local Nation Health Service formed a rapid response team able to provide mental health care to people suspected of being at risk of suicide or self-harm. The Mental Health Street Triage service, is based within Bishopsgate police station and operates every day from 5pm to 3am. This is the time period during which evidence shows that most mental health related incidents and detentions typically occur and when our late-night bars, clubs and restaurants are busiest.

Under the scheme, mental health professionals Helen Nunn, Crystle Clarke and Denise O’Grady from the East London NHS Foundation Trust accompany police officers to incidents where a 999 call has signalled an immediate threat to life. The aim is to provide quick, expert, and tailored decisions about support services, reduce the impact on police time and help reduce the number of people detained by police for assessment under the Mental Health Act.

In the words of Sergeant Luke Harley “The City of London Police work with Mental Health Street Triage nurses to provide a better response to incidents of mental health crisis. This partnership approach enables officers to access specialist clinically led advice on the street leading to better informed decision-making about patient care.” Dean Henderson, City and Hackney borough director for the East London NHS Foundation Trust, states the goal is “to help vulnerable individuals feel calm, safe and reduce the number of people in crisis needing to be taken to places of safety for assessment”.

The initiative has now been running for some time and one of the mental health professionals, Helen Nunn, has now responded to hundreds of calls with City of London officers and recalls one recently involving a 13 year old, who had absconded from officers while at an emergency unit at a local hospital after having swallowed a battery. Some hours later a young person was reported in a confused state in the middle of the road on London Bridge. Realising it could be their missing teenager, Helen attended along with officers. The individual was shivering in jeans and flip flops, would not make eye contact or respond to their name and appeared in a catatonic state. Although Helen tried to elicit a response this didn’t work, until an officer tried using an alternative preferred name found on the police system. This enabled Helen to take the young person to somewhere safe and warm, where she gained further insight into the traumatic issues which had severely impacted their mental health, leading to selective muteness and the chain of events leading up to the situation on London Bridge that night.

With access to all the necessary information about their health care and treatment, Helen was able to make direct contact with the nurse treating the young person, who also spoke to them over the phone. This contact with a familiar trusted person made a big difference and following this, the young person gestured to something in their pocket. Upon checking, Helen found an empty blister pack of paracetamols which the teenager indicated they had taken since leaving hospital.

This occurred during a period of high demand for ambulances and so police officers agreed to take the young person to hospital as a matter of urgency. A nurse met Helen and the City Police officers on their arrival to ensure a safe handover of care, with the emphasis firmly on the welfare and safety of the young person, rather than making them feel as though they’d done anything wrong.

Sadly, this incident far from unique. Between July 2018 and June 2019 it is calculated that the MHST helped avoid 163 sections, where individuals would otherwise have been detained under section 136 of the Mental Health Act and supported 334 patients presenting as mentally unwell or in distress who have come into contact with the police. With immediate access to medical records and a wealth of experience in dealing with mental health, the MHST are able to assess information and make informed decisions based on an individual’s specific circumstances. This results in the best outcome being decided for each person in crisis but also in a saving in police time, as detention for assessment under the Mental Health Act is not always necessary but is something the MHST rather than police officers are best placed to assess as mental health experts.

The Covid lockdowns over the last year have also demonstrated the benefits of this partnership approach. People have found it so difficult being apart from their friends and family, plus the concerns relating to jobs and personal finances. For lots of people this is the first time in their lives that they have not been working, and the loss of structure to their lives has left many struggling to cope.

Helen Nunn says “I have seen so many patients during lockdown that have gone from being very depressed to psychotic and I am talking about people that have never had psychosis before or never really been that depressed. I have seen too many people this year that have been made redundant from their jobs and they have tried to kill themselves as a result. People have been unable to cope with nothing to do; where they placed so much emphasis and importance on their jobs and careers, when it’s been taken away from them, they see suicide as the only option.”

Partnership working through the MHST has never been more important and sadly, with the impact from the pandemic on mental health becoming ever more apparent, demand on Helen Nunn and her colleagues is likely to be ever increasing. What is very clear is that working together has improved care for those in crisis and ensured valuable resources are effectively targeted. Working across the police, health and local authorities silos is helping reduce harm on the streets of the City of London. 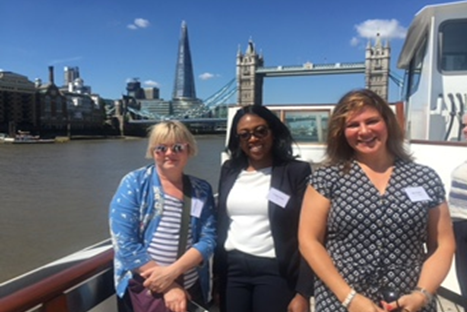